An organization is not like an animal, an end in itself, and successful by the mere act of perpetuating the species. An organization is an organ of society and fulfills itself by the contribution it makes to the outside environment. And yet the bigger and apparently more successful an organization gets to be, the more will inside events tend to engage the interests, the energies and the abilities of the executive to the exclusion of his real tasks and his real effectiveness in the outside. [Peter F. Drucker]
TELOS PI is dedicated to support individuals in finding a purposeful career and guide the executive management of organizations towards a purposeful collective goal. The company mission merges a life long interest in human development and social psychology with a decade long experience in China's intellectual property, technology transfer, manufacturing and automation industries. TELOS PI service rests on six pillars: 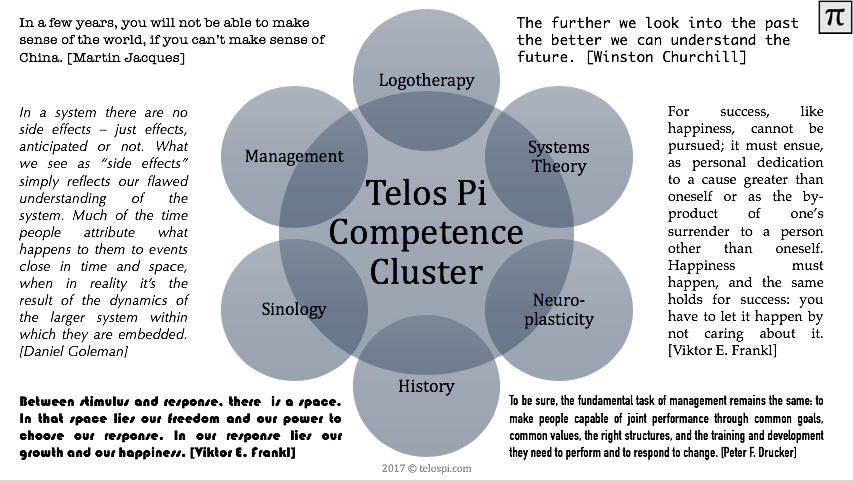 Some of our clients have asked: Why Telos Pi?

A telos is an end or purpose and the root of the term teleology, i.e. the study of objects with a view to their aims, purposes, or intentions. In contrast to telos, techne is the rational method involved in producing an object or accomplishing a goal or objective. Not only objects, but also subjects, i.e. human beings can be studies in regard to their aim and purpose. This is what neurologist Viktor Frankl, famous for his concentration camp account Man’s Search for Meaning, did and why he founded logotherapy, a school of psychotherapy which claims that human well-being is intrinsically connected to living a responsible and purposeful life.

Pi is a so-called irrational and transcendental number, which can be juxtaposed to our now binary world of either 0 or 1. Almost any imaginable information can be translated into the binary code, but it seems that neither individual nor organizational trajectories can be sufficiently expressed thereby. Binary or linear thinking locks us in, it deprives us of non-linear thinking and as such spontaneity, surprise and miracles. Most executives don’t like surprises, but many hope for miracles.

I always ask in my assignments what it is that a person or an organization wants to achieve. In the era of the Anthropocene there is the necessity to ask this question more than ever. If companies have as their sole objective profit maximization they are ignorant of the social and environmental responsibility they have to society at large. Teleology as a method of critical and solution focused inquiry has thus gained tremendously in importance.

I have moreover come to the conclusion that the binary execution mode as it was mostly applied throughout the industrial revolution is largely obsolete. It must be supplemented with what management experts like Ulrich Grimm call paradox management and what psychologists like Daniel Goleman describe as attention switch. We need to be able to engage in intuitive mind wandering and highly focused execution. Only the combination of the two - incorporated in the individual as well as the organizational mindset - will produce the results which are needed at this point.